Coming from the far distant past, the Sator Square is the Latin word square most popular in the world. Experts still do not agree on its solution, thanks to the mystery surrounding it.

The book “Enigma” of Silvana Maria Zanella, provides a completely new solution, thanks to a rare word discovered in an ancient code. The mysterious word “AREPO”, that wasn’t supposed to belong to any recognized language, has been finally translated. 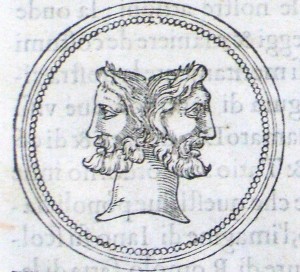 The solution falls within the guidelines of the experts, as Amedeo Maiuri and Hildebrecht Hommel, and it is proposed with full respect of the main steps of the Square history.

Moreover, the author provides original solutions for many other riddles belonging to the past, showing us an incredible slant on Rome life in the I century b.c.

The ROTAS square shall not have Christian roots. In fact, sources confirm that before the eruption of Vesuvius Christianity was not yet spread in Pompei, the city where the first square was found.

Instead, the SATOR square can be a subsequent Christian variant. In fact it appears for the first time on an egyptian ostrakon at the end of IV century a.C.

And it’s one of the great characteristics of the Church that it always received the best from the culture of the past.

The anagram PATERNOSTER Alfa-Omega was published for the first time on a German magazine in 1924 by C. Frank.

But, historically, such a thing is just not possible because Paternoster spread as a prayer only in the II century a.C. and the letters A and O could, at most, be two alfa and two omicron, which do not have the symbolic value of the Alfa-Omega.

According to Codex Sangallensis 912, Arepo is a sword having the shape of a scythe and comes from the greek:

αρπη = the gods scythe, symbol of the gods power

From a philological point of view, ARIPUS and AREPO are only different variants of the same word.

Moreover, AREPO, is a word that doesn’t have declensions. In fact, it is truncated with the apòcope that can be both the subject and the direct object.

In fact, it is the subject in the normal reading of the square, but it becomes the direct object in the boustrophedon reading, i.e. the zig-zag reading.

Polysemy is the key to solving the Square.

Each word, in fact, has more than one meaning and more than one solution can be accepted, as long as the parallelism between heaven and earth, men and gods was maintained. 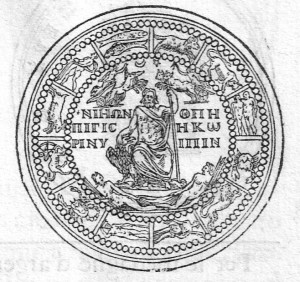 All the rules to solving the cryptogram can be found in the III book of Ars Rhetorica of Aristotle, in which the philosopher talks about witty phrases and riddles.

From a literary point of view, the Sqaure has an educational purpose, that is to widen the horizons of the mere reading, bringing metaphorical and witty meanings.

A less educated reader would stop at the literal reading with agricultural meaning:

The sower takes care of his scythe, his works, the wheel of the cart.

A more cultured person would understand the double meaning of the words and would transfer them from the terrestrial to the celestial sphere.

The Creator rules the Big Dipper, constellations, the stars.

A reader cultured both in literature and philosophy, would guess the boustrophedon reading (zig-zag), with all its metaphor.

God takes care of the Creation,

as well as the men takes care of his fields.

Finally, only a handful of readers would solve the anagram, skillfully encrypted like a bucolic phrase.

Solution from the Veronese Riddle:

The writer keeps the pen, the literary works, the wheels of the poetry.

ROTAS can be interpreted as the wheel of the fate:

but God decides the destinies. 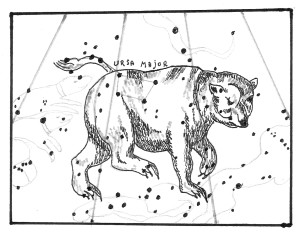 Through the polysemy and anfybology, double meaning, we also solve other famous enigmas of the past, like the Enigma of Homer and the Virgil Riddle.